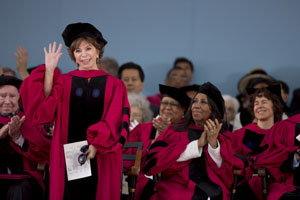 I have good news for you, graduates: What comes next is better. Almost anything in life is better, not due to the evil nature of high school, but to the crazy nature of adolescence.

Isabel delivered the following speech to the graduating seniors—including her granddaughter, Andrea—of the San Domenico School in San Anselmo, California, on June 5, 2010.

I am very happy to participate in this moment of your lives. You have been captive at school since you were toddlers and now, finally, it’s over. Congratulations! Thanks for choosing me as your speaker. It’s an honor for me but it’s embarrassing for my granddaughters. Relax, Andrea and Nicole, it will be over in ten minutes. I asked Andrea, who is graduating today, to help me with the speech, and she said: “Be short and to the point. We seniors are into comedy, so you can try to be amusing, but be sure that everything you say is appropriate for Sister Gervaise.” She warned me not to mention contraception, alcohol, or drugs, so I will skip half of the advice I was planning to give you. The other half is this: Beware of credit cards, lawyers, preachers, guns, loopholes, and shortcuts. Also, try to earn some money, because being poor is not fun. Okay, that’s the extent of my advice.

Today is a rite of passage: You end childhood. It’s exiting to start adulthood, but it’s also sad to say goodbye to your friends and leave this sanctuary of San Domenico, where you have been nurtured. Your affection for this school is surprising to me. You are supposed to SURVIVE high school, not to LIKE it. I hated mine! I attended an ancient British school where students were expected to memorize the Bible and revere the Queen of England. We had to wear the most unappealing gray uniform with a bedpan for a hat, and even lunch was didactic. If one could eat boiled liver, one was prepared to suffer the slings and arrows of outrageous fortune with a temperament of steel.

I have good news for you, graduates: What comes next is better. Almost anything in life is better, not due to the evil nature of high school, but to the crazy nature of adolescence. Your hormones are raging, your brain is on steroids, and you get pimples and hair in unpredictable places. If you are a girl, you THINK you are ugly. If you are a boy, you ARE ugly. You have no freedom and no money, and if you work you get paid next to nothing. Your parents are abominable cave people. They don’t know anything, they spy on you, they are in your face. You hate them and probably they hate you, too, but don’t worry, often this is temporary.

You can’t wait to leave home and would never admit that you are scared. You crave independence—you want to drive, party, and have boyfriends—but wonder if you will meet the challenges of adulthood. And it’s hard to give up a clean bed, real food on the table, and someone to do your laundry. In a perfect world it would not be a bossy mother but some kind of foreign and, if possible, mute housekeeper. I am afraid you will not get all of that unless your parents are filthy rich and morally inept. Unfortunately, with independence you also get responsibilities. You thought that taking out the garbage was bad? You just wait! I hope you have not been spoiled rotten at home, because it’s an inevitable law of life that you have to give back at least as much as you take. Give me, give me, give me only works with certain parents, not with the rest of the universe.

In the long run, girls, it’s going to be fine. You are not going to be dropped in a war zone, you’re only going to college, and you are better prepared than you think you are. You belong to the smartest American generation in history. Not the bravest or the most resilient, but certainly the most informed, connected, technologically savvy, and healthy. By now most of you know what you want and how to achieve it. You have self-confidence and self-respect, which means also that you can trust and respect others. You are empowered by the best education available, and in this school you learned to use your power and resources to help others. It’s in giving that one becomes rich; the only wealth that counts is in the soul. All the rest can be lost in a second. I have started from scratch several times. I have had to pack a small bag, close my house with everything it contains, and leave for good. And believe me, each time I have promptly forgotten what I lost. Stuff is irrelevant. Sooner or later we have to throw overboard our possessions, vanities, and ambitions; only the good we have done matters.

My daughter Paula had a mantra that I made mine after her premature death: “You only have what you give.” In the nineties she was in Spain and I was living in California because I had fallen in lust with an American. Lust turned to love and now Willie is my current husband. Willie’s dysfunctional family provided great material for my books and tested my humanity constantly. I used to call Paula often to complain about our messy life. Patiently, she would allow me to vent and then always offer me the same advice: “Mother, what is the most generous thing to do in this case?” It worked like magic. Generosity is usually the best approach in any situation. Paula was twenty-eight when she fell into a coma due to a rare illness, and a year later she died in my arms. It’s easy to let go of everything material; the real test is to let go of those we love the most. In the depth of my grief I remember Paula’s mantra and decided that the most generous thing to do in those circumstances was to create a foundation and continue the works she was doing as a psychologist and teacher. My foundation’s mission is empowerment of women and girls. Females are still the poorest of the poor. They are exploited; abused; forced to have children they can’t support; sold into premature marriage, prostitution, and forced labor; denied education and freedom; beaten; mutilated; and even killed with impunity. There is much work to do, girls. Our less privileged sisters need our help. Every time I sign a check from the [Isabel Allende] Foundation I can feel my daughter at my side. She is happy, and so am I.

One of the scariest things about adulthood is choice. What if we make a wrong choice or miss an opportunity and ruin our future? In my experience, the really important events that affect our destiny are beyond our control. Bad and good things just happen. In life there is room for a lot of mistakes, and unless we do something really awful and get caught, like murder, there is usually another chance around the corner. Don’t feel trapped because you hit a dead end; turn around and start again. I have made foolish choices that have hurt me and the people I love, and yet here I am, still standing. The little I know I learned from my errors, never from success. And all my strength—which is a lot—comes from overcoming bad times. Happiness is completely overrated. There is nothing wrong with some struggle and pain. For a life fully lived, you will have to take risks and suffer. And so what? According to my mother, if nothing hurts, you are dead.

The world that you inherit is not good, but it’s better than the world my generation received. I was born before the Declaration of Human Rights, in the middle of the Second World War, when Americans dropped atomic bombs in Hiroshima and Nagasaki, when millions of people died in Nazi concentration camps, and many more perished of starvation and disease every year. It was definitely NOT a better world.

There is always the temptation of pessimism, but I refuse to believe that the end of civilization is near. We can destroy the planet, but we can also improve it. Never before has humanity had so many resources, so many effective ways of communication, so much knowledge. We are not going backward, we are progressing. I have seen it in my lifetime. When I was young, racism, child labor, colonization, torture, the treatment of women as inferior beings, and many other forms of abuse and discrimination were not even discussed. We are changing that.

Your generation is ready to take over. You want meaningful lives more than economic success, you want to make a difference, you are determined to achieve peace and protect the environment. The globe is your common home and you will take care of it. You will live longer; you are stronger, smarter, and even taller than previous generations—just look at me! You were born with the ability to manipulate computers, to imagine infinity, and to dwell in a virtual dimension. An iPhone comes with no instructions; it’s assumed that even a moron can operate it. (I don’t touch it. What if it steals my soul?)

This is your time, young women! You have open minds and gentle hearts. Your mission is to create the ethics of the second millennium and dream the future. I want to be part of your team. I am old but not senile or decrepit. Let’s join efforts in the exciting task of inventing a more benevolent world where love for each other and love for this planet and its creatures will prevail.