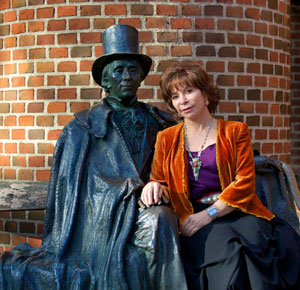 I lay awake in the darkness waiting for the fictional characters to materialize in the shadows of the room. At first they were translucent and silent, like jellyfish under water, but soon they would become more tangible. A phantasmagoric light illuminated the room and I could see them clearly and hear them chatting away; they were my friends.

Named a goodwill ambassador for the 2005 Hans Christian Andersen bicentennial celebration, Isabel delivered the following speech during a ceremony at Copenhagen’s Rosenborg Castle on September 30, 2004.

How could I tell you what being appointed ambassador to the Hans Christian Andersen bicentenary means to me? Of all the honors that one could possibly receive, this one is by far the most magic. Thank you for allowing me to celebrate with Denmark and the rest of the world the power of storytelling.

Like most children born in the last couple of centuries, I grew up with Andersen’s tales. I was almost four years old when my father went to buy cigarettes and never came back. Finding herself alone with three children and no resources, my mother returned to live under her father’s roof. In that large and somber house, my mother, my brothers, and I shared the same bedroom. This was in the forties, and there was no television in Chile. Fear and fantasy, plus the scary noises of mice and ghosts, made our nights very long.

At bedtime, my mother told us stories. My brothers would eventually fall asleep, but I believed that each and every one of those stories was true. In my mind there was no difference between the account of a naval battle of the nineteenth century, the family anecdote of an uncle that flew to heaven in a balloon, and Andersen’s unsettling fairy tales. I lay awake in the darkness waiting for the fictional characters to materialize in the shadows of the room. At first they were translucent and silent, like jellyfish under water, but soon they would become more tangible. A phantasmagoric light illuminated the room and I could see them clearly and hear them chatting away; they were my friends. They had escaped the confinement of their own story and got involved in those of others. Thus a tin soldier complained that he was bruised because he had slept with a pea under his mattress. Thumbelina put on the Emperor’s clothes, which were definitely too big for her, while her fiancé, the blind mole, chased a lovely lady dancer made of paper. The snowman started to melt because he was playing with matches, while the little match-seller went off to marry a prince who didn’t look at all like a prince; he looked like a toad. A nightingale, perched on a tinderbox, sang the best pieces of his repertoire to three enormous dogs with terrifying eyes. It was impossible to sort out the confusion of all those people in my bedroom—all of them with their own drama, arguing with each other or falling in love with the wrong person, and thus creating new stories for me every night.

When I was around five or six years old my mother got tired of repeating the same stories and she gave me a book of fairy tales by Hans Christian Andersen. I learned to read fast! Soon I discovered that those stories, which I believed to be true, had been made up long ago by a storyteller in Denmark. I felt betrayed! My characters were not free. They were trapped in the pages of the book. Their lives were printed and could not be changed. Thumbelina could not hear the golden nightingale singing; the naked Emperor would never meet Simple Simon; the ugly duckling could not become a prince. He could only turn into a swan, which is a very limited career option, if you think about it.

I was an ugly ducking myself and I had the fantasy that one day I would turn into a movie star. I had no intention of becoming a swan. Furthermore, in the exquisite illustrations of the book, my friends looked totally different from the way I had imagined them. The Little Mermaid did not have green hair. She was blond!

I liked the book and soon I learned all the stories by heart, but I no longer wanted to be any of the characters in it. I wanted to control the plots. I wanted to be the narrator, to be Hans Christian Andersen. Maybe that was a turning point in my life. My mother says that as soon as I began to read I started making up stories. I was always tormenting my poor brothers with morbid tales that filled their days with terror and their dreams with nightmares. Later, my children and my grandchildren had to go through the same ordeal. In my adult life, however, stories have helped me to gain the hearts of a few men. There is nothing quite as aphrodisiac as a story told with passion between two clean, ironed sheets…In my childhood I was often punished for telling lies. Now that I make a living with these lies, I am respected as a “narrator.”

I imagine that Hans Christian Andersen endured the same fate. At the beginning, people must have thought that he was mentally disturbed. Why was he not working as a shoemaker, like his father? That was a perfectly decent job, while telling stories was not considered a reasonable occupation, but a character flaw. And yet stories have always been essential, they are to humankind what dreams are to individuals. As individuals we need to dream. If we are not allowed to dream we perish, suffocated by pervasive demons. And without stories civilization would perish. There would be no collective memory, no understanding of events, no spiritual legacy. Storytelling has contributed to the shape of the human mind since the beginning of time. Some tales, repeated over and over, describe our journey through life and death. We find them in immortal myths reiterated everywhere: the lost paradise, the hero in search of justice, the struggle between good and evil, the battles against the dragons in our own souls. All the great plots have already been told. We can only create new versions of the same ones, but every time a good story is told it comes again to life with the same charm of the first tale. And that is exactly what Andersen’s stories do to us. They charm us every single time!

There are millions of storytellers. Every year thousands and thousands of books of fiction are published all over the world. Yet few stories are memorable. Why are Andersen’s tales eternal? Why can they be told for two centuries, in different languages and cultures, and always seem fresh? There is no answer to these questions. Many authors achieve success for a while, but very few survive the erosion of time. Innumerable stories tell us about human nature, and are written with great talent; many have the power to console us in times of sorrow or to show us the way when we are lost, yet they don’t become classics. Many are about justice, honor, and love, or about loss, separation, suffering, and death, like Andersen’s stories, yet they are soon forgotten. What makes Andersen unique? I suppose it is magic.

Allow me to compare Hans Christian Andersen to another immortal artist whose centenary the world celebrates this year: the Chilean poet Pablo Neruda. Like Andersen, Neruda was born in a small town in a small country, in a poor family. Andersen’s father was a shoemaker; Neruda’s father was a railway worker. Like Andersen, Neruda found his vocation very early in life. He was a shy boy, introverted, extremely sensitive, a dreamer. Anything would trigger his imagination: a leaf falling from a tree, the smell of freshly baked bread, the sound of an ax chopping wood. His heart would break at the suffering of others, and from that broken vessel compassion flowed in poetic form. Later, he traveled extensively, gathering images, landscapes, memories, objects, and peoples’ stories, which he transformed into some of the most beautiful poems ever written. He wrote about common things: odes to an apple, a spoon, a dictionary. He wrote passionate love sonnets and songs of despair. He wrote about social justice, imperialism, and war. His work was translated into every known language, and in l971 he won the Nobel Prize for Literature. Like Hans Christian Andersen, Pablo Neruda has survived the inexorable passage of time and still speaks directly to our hearts. These extraordinary artists have the power to move us profoundly, to change us. Their work, touched by a magic wand, shines forever.

Several decades have gone by since my mother gave me that first book of fairy tales. She is now eighty-five years old and she still captivates me with her stories. I have also become a storyteller and now I tell stories to my grandchildren and to a few other people who are kind enough to read my books. I have never forgotten the debt of gratitude I have to Hans Christian Andersen, master storyteller.

Thanks, ladies and gentlemen. Many times, many thanks, as Pablo Neruda once said, for the splendid gift that you have given me today. A prince, a real prince in a fairy tale palace, has appointed me ambassador to Hans Christian Andersen’s magic universe. What else could I possible want at my age?